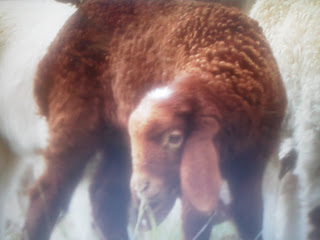 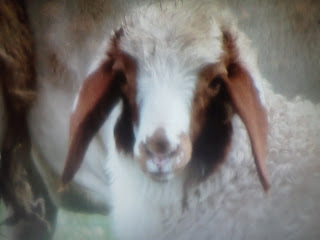 I was looking through some of my Awassi photos from my trip to Australia and wanted to share a couple. The wool texture, coloring and facial features are quite unique. Theses lambs are considered to be the new and improved Awassi sheep breed and have a higher milk production than the traditional Middle Eastern Awassi.

It is important to take biannual fecal samples of your dairy sheep to check for parasites. Take samplings of several different sheep to your local veterinarian and have them checked for "egg count". A good time to do this in in early spring and late fall.

Posted by Unknown at 7:59 AM No comments:

The olfactory sense of sheep is highly developed and difficult for humans to relate to. A sheeps heightened olfactory system most likely incorporates olfaction more completely with their interaction of the natural environment.

In spite of humans inability to understand the full scope of a sheeps sense of smell, perhaps we get a hint when an odor triggers a long buried memory or emotion. The sense of smell is mysteriously linked to the core of human and divine sensibilities.

Sheep use sense of smell in numerous ways. One way often observed is when smell is used to identify other sheep, particularly when a ewe uses smell to identify her lamb. Another common use of smell is during mating. The ram moves from ewe to ewe detecting which ewe is in heat (estrus). The classic head raising, lip curling behavior of the ram as he smells estrus females is called Flehmen response. This trait is occasionally noticed in females due to a Vomeronasal organ in the roof of their mouth not found in humans.

Baaaaaa Baaaaa and have a great day!

Posted by Unknown at 8:32 AM No comments:

God bless the USA and all our wonderful sheep!

Posted by Unknown at 8:22 AM No comments: